Coming to us from Seattle Coffee Gear is guest writer Samantha Joyce on the burgeoning problem of coffee rust disease that has the potential to decimate much of the world's coffee producing regions. This article was originally published on the onocoffee blog. 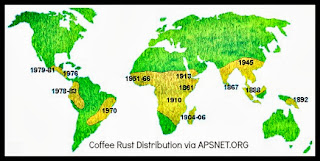 It is time to put coffee rust into perspective. It will effect the coffee you drink next year and in subsequent years to come. You may have heard in the news that coffee rust (Hemileia Vastatrix) is a fungus that attacks Coffea Arabica leaves. Without enough viable leaves to provide nourishment, the coffee plant cannot set fruit for its full potential of coffee cherries. Harvests are limited, and not just for the current season, but also for subsequent seasons. This is all fine and good as long as you are willing to pay a higher price for your daily coffee. The trouble is the coffee rust problem is too widespread and too entangled to be sorted out by simple supply and demand.

While coffee rust has existed as long as there have been coffee plants, it was first recorded in Kenya around 1861. Now it exists in coffee producing regions across the globe. It flares up from time to time when the conditions are right for fungal growth. This includes a combination of moisture, temperature range and sunlight parameters that can exacerbate the spread of the fungus. The cycle does not complete in one season; it becomes a multi-year destroyer. After a serious outbreak at the turn of the last century affected much of Southeast Asia, the Philippines switched from coffee plantations to rubber tree cultivation. Other countries followed suit or switched to tea production. Keeping this historical perspective in mind, Guatemala's declaration of a state of emergency in February 2013 was not an alarmist reaction. Coffee rust is rampant in Mexico, Guatemala, El Salvador, Honduras and Costa Rica. Crop loss is estimated at 30% by the non-profit World Coffee Research organization in the 2012/2013 seasons. Without immediate action, WCR estimates an 80% crop loss in 2014.

There is no scientific consensus as to how to keep coffee rust in check. For smaller outbreaks fungicides have been used. The Guatemalan government distributed $14 million to 60,000 to assist coffee growers according to BusinessWeek. Even with these additional funds there are no guarantees that farmers will be able to control the outbreak, since the timing of the application is crucial to fungicide efficacy. This short-term solution should also be weighed against health concerns for local residents and the toll on the environment in effected areas. Coffee rust mitigation is a global problem that deserves global attention.

Ideas and theories about what causes coffee rust and how to treat it abound, but understanding is still limited. A few possible culprits include global warming and high-density monoculture for the fungal spread. To combat the disease some researchers have proposed rust-resistant coffee plant strains. In the short term, these plants are not generally commercially sought-after varieties. In the long-term, the plants tend to lose their resistance to the leaf rust. Another idea is to let loose a fungus that eats coffee rust. However, there is no easy way to use a biological control (and this sounds like the premise of a sci-fi movie where good intentions go awry). These and other ideas were outlined in the first International Coffee Rust Summit held in Guatemala this past April.

Daily Coffee News has posted the official summit report and continues to post updates on coffee rust. Dana Foster, Director of Coffee and Green Bean Buyer for Seattle-based Zoka Coffee toured coffee farms in Central America in March. She reported, “It seems that those farms most affected were the ones that had no preparation (due to lack of knowledge or funding). We saw many healthy farms directly adjacent to farms suffering from rust.” The question remains, how to reliably prevent the spread of coffee rust now and avoid future outbreaks? Immediate action and more scientific research are both required.

Samantha Joyce is a writer for Seattle Coffee Gear. She lives near Puget Sound in West Seattle and cannot imagine a world without coffee.